A Ukrainian Fiddler in the New World

It is not difficult to think of Pawlo Humeniuk as a major fiddler of his time - a man whose recorded accomplishments were on a par with those of Eck Robertson, Clark Kessinger and Pappy McMichen - even if they were as ignorant of him as he undoubtedly was of them.  But he shares with them an important legacy of recordings, and most of them bear witness to the depth and broad scope of his work.

Though he lived a full eighty years, biographical details are few.  An undated obituary in the Ukrainian-language newspaper Svoboda of Jersey City, NJ, gives the place of his birth as Pidvolochyska, a village in Western Ukraine. 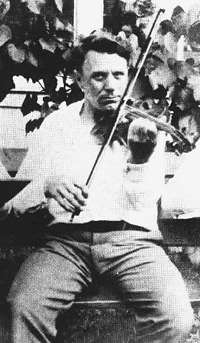 He died on 24 January 1965, and we may infer from his age that he was born in 1884.  He arrived in the United States around 1902, according to another brief article, which also states that he studied privately in New York with a Professor Makhnovetsky, a graduate of the St Petersburg Conservatory.

1  A statement that he founded an ensemble which was popular at weddings and concerts is probably true only in part.  The shifting instrumentation suggests that he worked both record dates and social functions with musicians available at the moment, rather than maintaining a single group.  Myron Surmach remembers that Humeniuk was a skilled instrument maker and repairer, and an early undated catalogue of violins from the Homenick Brothers Violin Shop (printed bilingually in Ukrainian and Polish) bears this out.

Myron Surmach himself is a figure of interest and importance in the history of Ukrainian music in America.  His story is documented at length (albeit in Ukrainian only) in his autobiography, History of my Surma Bookstore.

2  Born in Galicia in 1893, Surmach followed an older brother to America in 1910, joining him in the anthracite mines in Wilkes Barre, Pennsylvania.  Soon he graduated to work in a carriage shop, earning extra income by selling Ukrainian prayer books and calendars door to door.  His success emboldened him to move to New York City, where he opened a bookstore on East Seventh Street in 1916.  Over the years he became increasingly involved with publishing, wholesaling and retailing sheet music and, by 1920, becoming involved in record retailing as well.  As his business grew, he developed friendships with record company executives and eventually music on Ukrainian-American recordings became a strong reflection of Myron Surmach's judgements of his community's musical tastes.  At first the records were relatively formal performances of standard popular material and folksongs, usually sung by trained voices with studio orchestras.  The records were not a reflection of the tastes of the real villagers of Surmach's generation who treasured their old world traditions, ceremonies and music, even as they were making radical adjustments to New World conditions.

Surmach and Humeniuk met in the early twenties.  One day in 1925 they were informally visiting in the bookshop when a representative from Okeh Records came in.  The company had been trying without notable success to activate a line of Ukrainian discs, drawn from Odeon masters produced in Europe.  There was no village music on these records and the man said that he would like to record musicians who could play it.  Surmach introduced Humeniuk to Okeh on the spot; Okeh followed up by scheduling a session on December 3.  The energetic quartet Humeniuk assembled turned in a pair of kolomyikas and two kozachoks.  All four were also released as horas in Okeh's Romanian series (as the Orchestra Nationala Din Sibiu), reflecting a practice of recycling instrumental music from one ethnic series to another prevalent among all major companies at the time.

The records sold well, despite the fact that Okeh was still recording acoustically.  But its rival, Columbia, was a licensee of the Western Electric process which was of critical importance in the faithful reproduction of violin music.  An initial Humeniuk session in March 1926 was unsuccessful and four new instrumentals two polkas, a kozachok and a kolomyika were remade a month later.  Columbia already had an active Ukrainian series whose star was the earthy actor and comic baritone Ewgen (Eugene) Zukowsky.  His broad humour and double entendres were viewed with alarm by Ukrainian yuppies of the day, but his folksy charm appealed to a large number of others.  Zukowsky and Humeniuk were a natural team and they joined forces to create a cameo version of an old world wedding on the two sides of a twelve-inch record.  On Ukrainske Wesilia a gruff father gives away the weeping bride (played by Nasza Roza Krasnowska) as the priest intones and the fiddle plays.  It was so evocative, according to Myron Surmach, that people of many nationalities bought the record (Co 70002-F), even when they didn't understand Ukrainian.  Claims for total sales of between 100,000 to 150,000 have been made, though no documents exist to support them.  Still, the disc does turn up often and Columbia kept it in print until the 'fifties.  Its success vindicated Surmach's judgement and made a star of a good country fiddler.  Subsequent discs added skits about christenings, engagement ceremonies and holiday observances to the growing list of dance tunes. 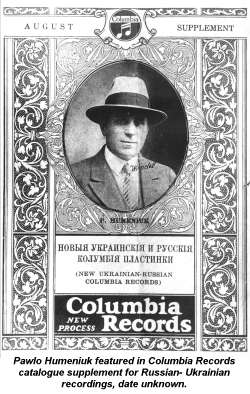 On most he was joined by the ebullient Zukowsky and the superbly cracked-voice Krasnowska - part of the Humeniuk sound for the next 15 years.

In 1926 two polkas from Columbia's 27000-F Ukrainian series were reissued pseudonymously in the 18000-F Polish series.  In January 1927 the two-part skit Zareczyny with a vocal in Polish by Zukowsky was released on Co 18182-F.  Its success led to more Polish recordings in the spring, including (of course) a twelve inch Polskie wesele (Polish wedding).  To Poles, our friend became known as 'Pawel Humeniak', since the -uk name ending is exclusively Ukrainian.  Eventually real Poles replaced Zukowsky/Krasnowska as singers, since Polish was only a second language for them.  Though occasional discs of traditional southern Polish fiddle music continued to appear through the mid-30s, the trumpet and clarinet gradually assumed a more important role as Humeniuk developed a sound which would be passed on to important eastern-US polka band leaders like Ignacy Podgorski and Edward Krolikowski in the 1930s.  Humeniuk's polka Kanarek, recorded in February 1928, was played at a bright tempo and featured a Bob Fuller-ish 'laughing' clarinet.  According to the Chicago retailer Alvin Sajewski, it was the best-selling polka disc of the late 'twenties and served as a hallmark in the development of the eastern style.

Meanwhile, Humeniuk's Ukrainian language releases served up somewhat more traditional music.  A remarkable session in November 1926 produced four fiddle tunes played with a cymbaly, or hammered dulcimer.  This lovely instrument was a holdover from the days when Ukraine was part of the Austro-Hungarian Empire, which survived for a century before dissolution by World War I.  Hungarian music was pervasive and became an influence on Slavic styles throughout the Empire's sphere of influence.  The Tanec pid werbamy (Dance under the willows) produced at this session is among Humeniuk's best-remembered performances, and justly so.  It's a sophisticated combination of kozachok and kolomyika themes with variations that would make your average back porch fiddler put his instrument in hock.

A glance through the discography reveals Humeniuk in a variety of settings as he turned out dozens of dance tunes, folk songs and musical skits based on old-world ceremonies.  The years after 1930 saw a reduction or even cessation of recording activity in many ethnic fields, but Humeniuk's popularity kept him active in the studios throughout the Depression.  By this time the ever resourceful Myron Surmach had inaugurated a weekly Ukrainian broadcast series which continued until the end of World War II and helped to maintain an interest in the music during the difficult years, Humeniuk and other popular entertainers being frequent guests.  But record sales continued to dwindle and a few side trips to Victor did nothing to help - if anything, his Victor releases are considerably scarcer than the Columbias of the period.  A final 1936 Victor session produced an ambitious six-part Silver Wedding in Canada (a country which has also played host to several generations of Ukrainian immigrants), but, by this time, the old formulas no longer produced the spectacular sales results they had a decade earlier.  A big polka revival was on, fed by the ending of Prohibition and the proliferation of jukeboxes in bars and taverns.  The new polkas were bright, bouncy, catchy and deliberately ephemeral.  The accordion became more popular as a lead instrument since it could be heard more easily over the noise of drinking crowds, and the violin music, valued among older immigrants, seemed old-fashioned and overly rustic in comparison. 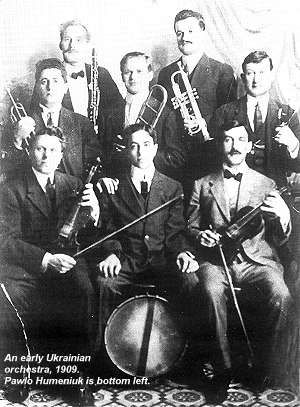 One further Columbia session in 1940 tried to capture these newer sounds, and the two resulting discs did well enough to remain in the catalogue throughout the 1940s, but Pawlo Humeniuk was not called upon to record again.

Humeniuk's living was never made solely as a performer.  With a brother, he maintained a violin shop which offered new instruments and repaired old ones.  However, as with most vernacular performers whom we were not fortunate enough to know in their lifetimes, we are left with little besides.

The Humeniuk story all but ends here.  Attempts on my part to interview his widow and children in the late 1970s were unsuccessful, though one anecdote emerged from a conversation with Humeniuk's daughter on the telephone.  His family and friends credit him with inventing the power lawnmower in the 1930s, though a search of the Patent office fails to confirm it.  But we may easily imagine him as a skilled instrument repair man who tinkered in other areas too, thereby creating the mower without thinking of it as a particularly special accomplishment.  Otherwise, no details of what must have been an interesting and productive life are known.

Myron Surmach, though officially retired at 92, maintains an active life.  He is an informed health food enthusiast and strongly believes in the beneficial properties of honey.  His small New Jersey farm contains hives with three million bees producing several varieties.  He maintains friendly contact with old friends on the Lower East Side of New York City by driving into town once a week to open the Surma Book and Music Store on East Seventh Street.  The shop has stayed in the family and is run for the rest of the week by Myron Surmach Jr.  A daughter, Yaroslava Mills, has for many years been an exceptional illustrator, weaving traditional Slavic folk themes into countless lovely children's books.  During the heyday of Pawlo Humeniuk and other Ukrainian record makers, Surmach maintained influential contacts with record companies as the largest Ukrainian disc retailer in the country, and he looks back with satisfaction at the many fine performances he helped to create.

Richard Spottswood is the compiler and producer of Ethnic Music on Records (University of Illinois Press; 1990.  ISBN D-252 01720-X), a complete discography of ethnic recordings made in the United States during the period 1893 - 1942.  Published in seven volumes, this massive work (Pawlo Humeniuk alone runs to 12 pages) is organised by national grouping and language and lists primary and secondary titles, composer, participating artists, instrumentation, date and place of recording, master and release numbers and reissues in all formats.  It is a uniquely valuable tool for music and ethnic historians, folklorists, collectors and enthusiasts alike.