Article MT253
Note: place cursor on red asterisks for footnotes.
Place cursor on graphics for citation and further information.
Sound clips are shown by the name of the song being in underlined bold italic red text.  Click the name and your installed MP3 player will start. 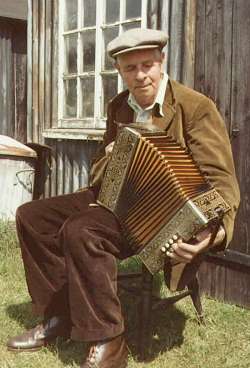 Haste to the Wedding

the melodeon playing of Walter Pardon

The Norfolk singer Walter Pardon will probably be familiar to many Musical Traditions readers.  After he came to wider public notice in the early 1970s, he was extensively recorded, mainly by Bill Leader, Mike Yates and Jim Carroll and Pat Mackenzie and he is regarded as one of England's finest traditional singers, with a known repertoire of 182 songs, the majority of which have been recorded and released.

Walter was born in Knapton on 4th March, 1914, in the same cottage he lived in for the whole of his life.  He learned most of his songs from his uncle Billy Gee, who lived in the same house for a while.  Billy Gee had learned many in pubs in North Walsham and the area as a young man, but this had stopped by the time Walter was an adult and his singing happened only at home.  He also played the melodeon, often playing the tunes of the songs he sang, but once again this was never in public.  It seems that the old songs were no longer appreciated in Walter's community, as he recalled to Bill Leader: "My generation ridiculed songs.  There were no young men forty years ago, when I was twenty, who went near a man of sixty to hear the songs.  That is a fact.  I never did sing out of the house hardly."

It was Walter's playing of the old tunes to amuse himself at home that caught the interest of his nephew Roger Dixon and would later have the effect of bringing his singing to a much wider audience: "He asked me years back.  He used to come in here for his tea, with mother and father and I, when he was a right small boy and I used to play some of these tunes over, you see, these old folksongs, and he used to ask what they all were.  And it would be about ten years ago when he wanted to bring a tape recorder down here to record them and I thought I never could sing them good enough to put them on."

3  Roger Dixon later gave Walter a tape recorder to put down some of his songs and these were passed on to Norfolk revival singer Peter Bellamy.  This lead directly to Bill Leader visiting Walter and recording a great many of his songs.

Walter's songs were extensively recorded from 1974 until he stopped singing in 1989, at the age of seventy five, considering that his voice was no longer good enough.  Four LP records were released in his lifetime.  However, in this recorded output only three tracks of his melodeon playing were included: Uncle Walter's Tune, described as "a melodeon tune that Uncle Walter Gee would play at Christmas time for step-dancers in Knapton,"

4  Uncle Walter's March and Old Joe, the Boat is Going Over, a tune commonplace amongst East Anglian country musicians.  Billy Gee played fiddle and Walter Gee the melodeon, and both had been active members of the Knapton Fife and Drum Band.  Uncle Walter's March may well have been the Knapton Fife and Drum Band's Grand March mentioned by Walter in his reminiscence of the band.

5  A further track was released on the Musical Traditions CD "Put a Bit of Powder on it, Father," a 1930s stage tune called On a See-Saw. A recently discovered recording of Walter contains many more examples of his melodeon playing and perhaps rounds off the picture of this man who entertained himself at home with these old songs and tunes, as well as appreciating that they needed to be conserved for their own worth.  It was made on 24th July, 1975 - only twelve days after Bill Leader visited Walter to record the songs which would make up the first record of his singing - almost certainly by Roger Dixon, and was deposited in the library archive of Gressenhall Museum before being transferred to the Norfolk Sound Archive.  It contains ten songs and twenty one melodeon tunes.

The songs recorded were The Rambling Blade, Old Brown's Daughter, Raggle Taggle Gypsies O, The Irish Girl, The Poacher's Fate, The Dark-Eyed Sailor, Van Dieman's Land, The Pretty Ploughboy, Jack Tar Ashore and I'll Hang My Harp on a Willow Tree, the vast majority being released in versions recorded by Bill Leader on two LPs in 1975 and 1977.  Walter is in fine voice here and gives great performances.  He also plays song tunes on the melodeon: The Rambling Blade, The Dark-Eyed Sailor, Van Dieman's Land, The Poacher's Fate and Old Brown's Daughter which he earlier sang on the tape, Maid of Australia and Caroline and her Sailor Bold which were in his repertoire and recorded elsewhere and, interestingly, The Ball of Yarn and Yellow Handkerchief, neither of which are among the songs he is known to have sung.  There is also another as yet unidentified song tune.  These are all played in a lively style and Walter clearly enjoyed playing the tunes of songs as well as singing them.

The rest of the recordings are a selection of country dance tunes and others not necessarily connected with songs and demonstrate a wider repertoire than tunes of songs he was familiar with.

Walter was certainly not a musician who played for dancing in any form; indeed, he doesn't seem to have played outside his home, but he seems to have learned various tunes for his own enjoyment.  Of those which have been released elsewhere, there are On a See-Saw, Old Joe, the Boat is Going Over, of which Rod Stradling makes the point that Walter leaves out all the pauses in the tune, a common trait amongst East Anglian melodeon players

Walter also plays a slow version of Yarmouth Hornpipe, the ubiquitous East Anglian step dance tune, in a fairly standard way, also only playing the B music once through each time, a trait fairly common amongst local musicians.  In a way, the presence of this tune is not surprising, as most local musicians had a version, but Walter didn't play in pubs and didn't play for step dancing.  Was he taught the tune by Walter Gee? If Uncle Walter played for step dancing, as recalled by Walter Pardon above, he most likely would have known the tune, and so it is possible, particularly as Uncle Walter's Tune and Uncle Walter's March came from him.  Walter certainly doesn't play the tune at a step dancing speed.  Rather more sprightly is a version of In and Out the Windows, another tune with wide currency amongst country musicians.

Walter plays two more hornpipes, both with loose rhythm, and the source for these seems to be his collection of 78rpm gramophone records.  Reg Hall accompanied Bill Leader on some visits to Walter and recalls that he had quite a collection of 78s which were all in pristine condition.  Reg Hall also provided Walter with others.  Amongst the collection were several Irish and Scottish country dance records.  Walter's playing of The Cliffe Hornpipe was learned from Peter Wyper (Regal Zonophone RZ G6986 Selection of Hornpipes: Cliffe Hornpipe and Harvest Home / Queen Mary Waltz) and The Greencastle Hornpipe from Frank Lee's Tara Ceilidh Band (Regal Zonophone RZ T6240 Irish Hornpipes / Irish Reels).

There are also three jigs, a very slow Haste to the Wedding, played pretty much as a waltz, a faster Cock o' the North and The Frost is all Over, played with a very loose rhythm.  The first of these seems to have come from Sean Nolan's Dublin Orchestra (HMV B.3391 When the Kettle Boils Over & Haste to the Wedding / Donnal's Favourite) and the others possibly from other tune medleys from his record collection, such as The Comerford Trio (Regal Zonophone RZ MR2580 Set Dance & Job of Journeywork / Jigs).  One other tune played by Walter on the recording is a version of The Floral Dance, which presumably he got from a recorded or broadcast source at some point.

Walter certainly learned many songs from Billy Gee: "He'd sing them at night, here by the fire, or else, if it was raining and he couldn't work, we'd sit in the toolshed singing to one another.  You see that big drum hanging up there…that was from the Knapton Drum and Fife Band.  Uncle Billy played the fiddle with them."

10  However, Billy Gee doesn't seem to have taught Walter any tunes, for the simple reason that he was no longer able to because of rheumatism, as Walter commented to Mike Yates: "At one time he used to play the fiddle, but by the time I was born his hands got locked like that, and he couldn't move his fingers about the strings."

Walter certainly tried to play the fiddle for a while, before deciding upon the melodeon: "I used to play fiddle, years ago, but that was only amateur playing, all on top of the strings.  Do you get a professional, he'd draw his hand right down to the bridge, but I could only play up there.  I always liked the accordions best."

Walter learned to play the melodeon on a simple instrument bought for him by his aunt Alice.  He seems to have largely taught himself, but doubtless with some help and encouragement from Walter Gee, as he again mentioned to Mike Yates: "I don't know if anyone can teach you, can they, to play? I suppose he might have had a hand in it.  I don't know.  Our styles were different.

"This accordion - I bought it in Norwich ten year ago this summer; sixteen pound ten.  My uncle Walter, he paid ten shilling for his, and that's just about equal in value, 'cause that's what his week's wages were.

"I still play that, have done for years, in here alone on a Saturday night, never missed.  I sometimes sit on the stairs and play, so people can't hear me.  I never bring it out.  I've never considered myself good enough to bring it out."

Walter Pardon was very highly regarded as a traditional singer, and rightly so with his huge repertoire, impeccable timing and thoughtful, rich delivery of the songs, allowing the stories to speak for themselves.  The large number of recordings released - on LP in his lifetime and on CD subsequently - and his large number of public performances bear witness to this.

12  His melodeon playing was certainly less accomplished, but nonetheless this very fine traditional performer seems to have derived great pleasure playing at home, the tunes he learnt from Uncle Walter and his collection of 78rpm records, as well as the tunes of many of the songs he sang so well.

I have listed just the full records of Walter's music.  For a more complete discography see the booklet notes to MTCD305-6.

A World Without Horses Topic TSCD514
Put a Bit of Powder on it, Father Musical Traditions MTCD305-6