... and other music from Belize

Used to be, just ten years ago, that Belize in Central America was the end of the world.  Aldous Huxley wrote 'If the world had any ends, British Honduras would surely be one of them.'  But not any more.  Belize today is a unique, peaceful mixture of people; call it a melting pot or a true rainbow nation.  Roughly the size of nearby Salvador but minus five million or so of its inhabitants, Belize has 200,000 souls, including African Creoles, Mayans, Mestizos, Mennonites, Rastas, Black Caribs, East Indians, Central American refugees, Lebanese, 'backras' (whites), expatriate Americans, even Chinese.  There are still thousands of British troops there as well, intended to keep the Guatemalans from reclaiming Belize as their lost province.  The large sign on the Guatemalan side of the border with Belize ominously states 'Belize is Guatemala.'  Also adding to the mix are scuba divers along the coast, visiting the Western Hemisphere's largest barrier reef.  There are also intrepid, mostly European, 'budget travellers' and some well-heeled eco-tourists as well.

I was there with my wife and daughter in September 1992, celebrating Belize's 11th birthday.  No longer called British Honduras, Belizeans elected to stay within the British Commonwealth as an independent state.  From National Day on 10 September, through Independence Day on 21 September, Belize was awash with revelry, parades, jump-ups and vaguely organised mayhem.

We were invited by our friend Mr Wilfrid Peters, musical leader, vocalist and accordionist extraordinaire, to participate and record his band in the musical celebrations that followed. 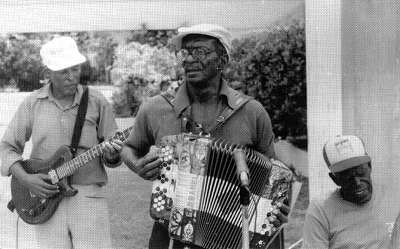 Our purpose was to combine live recording sessions of Mr Peters with excursions to other parts of the small nation.

It was a simple yet somewhat schizoid idea.  Belize City, the former capital, is not at all like the rest of the country.  The recommended strategy for visitors is to leave muggy, crime-ridden Belize City for the spectacular back country as soon as possible.  Enjoy the rest of the country's laid-back population, its mountain ranges, jungles, wetlands, Mayan ruins, beaches, islands, tropical sunsets and abundant wildlife - that includes jaguars, monkeys and Belize's odd national animal, the tapir (locally called the mountain cow).  Also, take some time to sample the excellent locally produced Belikin beer and stout plus exotic rum punches of every variety, some even blended with seaweed.

However, Belize City is where Mr Peters and his 'Boom and Chime Band' reside.  We recorded and video-taped Mr Peters as best we could .  He sings, or rather croaks, in strong Creole accented English and plays a rugged sounding accordion in a rollicking barroom style, somewhere to the left of Louisiana zydeco.  Folk Roots described his accordion style as 'heavily influenced by the sound of car horns in a Belmopan traffic jam'.  Not to be outdone, his band backs Mr Peters with a most awesome cacophonous rhythm section .  As that same reviewer claimed, 'The most driving rhythm playing ever heard, sheer excitement'. 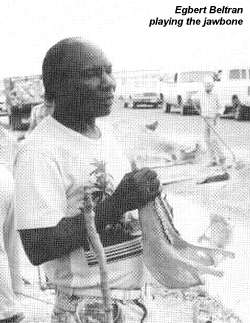 The rest of the band, for that matter, is all rhythm: Egbert Beltran plays the jawbone of an ass and the brake drum of a car, beating it with a metal stick.  Ruben Flores beats on the mahogany 'Boom and Chime' drum; one side with a mallet - the boom side - and the other with a drum sack - the chime side.  Mr Peters' son, Wilfrid Peters Jr, plays tumbas, which outside Belize are usually called congas.  Samuel Myvett pounds away on banjo and relative newcomer to the band, Lennox Blades, plays electric guitar.  Lennox replaced Allie Staine who, according to Mr Peters, wasn't holding his rum like he used to.  This is soulful, up-tempo, traditional dance music that puts techno and computer driven dance music to shame.  When Mr Peters starts to play, it' s simply amazing to watch everyone get up immediately and start dancing.

As recently as the 1970s, a friend of mine claimed that every dance and party he went to in British Honduras back then, always had this distinctive Boom and Chime dance music.  Sad to say, this has become a thing of the past.  Mr Peters' band is the last surviving that regularly performs 'Boom and Chime'.  As they told me 'Hurry up with this recording, we won't live forever.' As recently as a few years ago the Turtle Shell Band was the only other surviving band of Belizean traditional musicians - however on their last international tour, they apparently got so drunk and rowdy that they haven't played or toured again.

Boom and Chime music has been compared to Caribbean 'scratch', music with its exuberant rhythms and emphasis on playing 'found' instruments.  It's even been compared to Cape Coloured Jive from South Africa.  Actually though, this music is culturally connected to music from the American Gulf Coast, the Caribbean, Mexico and obviously from Africa, while there is also a considerable amount of British ancestry.  It's interesting that this combination of influences is what makes our own North American music so interesting, from jazz and bluegrass to rock and roll.  It's that unique mingling of both African and Anglo musical and cultural influences.

Mr Peters' Boom and Chime is now the last remaining Belizean band representing the music of old Belize; the land of rain forests and the music of the timber cutters.  Mr Peters and his band perform numerous 'brukdowns' which Chicki Mallan's Belize Handbook (1991: Moon Publications, Chico, CA, USA) describes as 'a cadence begun in the timber camps of the 1800s, when the workers, isolated from civilisation for months at a time would let off steam with a full bottle of rum and begin the beat on the bottle - or the jawbone of an ass, a coconut shell, a wooden block, anything that made a sound.  Add to that a harmonica, guitar and banjo and you've got 'brukdown'.'

William Setzekorn's Formerly British Honduras (1981: Ohio University Press, Chicago) adds to this, stating 'All breakdowns are original, sometimes biting and many are slightly vulgar.  Breakdowns relate a story, usually based on some local person.  They poke fun at some prominent personality and are full of saucy puns.  The more prominent the ridiculed person is, the more the song is enjoyed'.  Not surprisingly, North American music has had a profound effect on Belizean music.  Setzekorn continues 'Old Native music forms, so popular as late as the 1940s, have all but disappeared in Belize.  Only rarely is the traditional Belizean music, the "breakdown", heard except at private gatherings'. 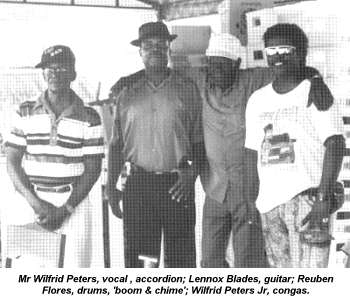 Mr Peters embellishes his 'brukdowns' with his own Creole songs, which provide additional commentary and stories with Creole lyrics.  Newer music in Belize runs the gamut from soca to reggae to another local hybrid, 'punta rock', an interesting updated electric version of older traditional Junta rhythms from southern Belize.

We recorded Mr Peters and his raucous musicians at Festival Grand Market, a huge street party held at Belize Technical College.  It looked remarkably like a tropical gone-to-seed version of Jazz Charlotte.  We also recorded him at a club date, a rather exclusive hotel club, where we had the luxury of some indoor recording space.  Just prior to our visit, Mr Peters' Boom and Chime were invited to Trinidad to perform at that nation's massive CariFest.  'They loved us', Mr Peters said excitedly.  'They said we were the best band there.'

We finished our recordings, even did some rudimentary videotaping and then set out for points unknown.  We headed south, taking the 6:00 a.m. bus down the unpaved Manatee Road, to visit friends living on a narrow spit of land in the middle of a huge body of water called the Southern Lagoon.  They are working on a project to create a national park out of these lagoons and the surrounding hills, rain forests and beaches.  We had the opportunity to sit-in on a Sunday meeting between our friends and the head of Belize's Southern Forestry District and the district's head surveyor.  The surveyor told us about their best jungle tracker who happened to live in the same village.  Later that evening, he came over to visit and we all sat out on the porch listening to his stories of the jungle while watching the moon rise out of the Southern Lagoon.

We continued further south, taking the once paved Southern Highway, heading for the worlds only jaguar preserve.  Covering over 100,000 acres, the area includes Belize's highest mountain, Victoria Peak, as well as wildlife, jungle trails and rudimentary visitors' facilities.  There are some problems for those who choose not to rough it.  First, the rainy season from June through January receives between 100 and 180 inches of rain.  That's an awful lot of rain and mud.  The other problem is that access is limited by hiking in; a six mile trek.  After staying at the wildlife sanctuary, we continued further south, catching a Land Rover ride with some British forces on manoeuvres.  We dried out at a village stretched along the ocean, called Placencia.  Placencia's unlikely Main Street is a two mile long sidewalk along which the entire village pursues its affairs.  Until the dirt road came through, the main method of hauling groceries and supplies was with the ubiquitous wheelbarrows navigating along the sidewalk built from conch shells and concrete.  Believe it or not, this is where we caught up with modern Belize music.

This part of Belize is where much of Belize' s modern music comes from.  Punta rock, perhaps the best known music from this part of the world, is derived from the largest cultural group living here, the Garifuna people.  Also known as the Black Caribs, they live along much of the eastern coast of Central America.  They are the descendants of the original Carib Indians of the Caribbean who intermarried through the centuries with escaped or shipwrecked slaves.  They look African while speaking an Indian derived language.  It's their lyrics, wedded to Caribbean soca (soul calypso) rhythms that provides the added kick to punta rock, now heard all over Belize and beginning to spread throughout the Caribbean and even to barrios in Los Angeles and Miami.

A Los Angeles based group, the Youth Connection, was playing at a dance in Placencia.  This was their first tour in Belize, having grown up in Los Angeles, they returned to Belize to reclaim their musical inheritance.  Placencia had another local band of note called Seabreeze, which in typical musician fashion lost all its musical equipment in one fell swoop when their financial backer demanded either the money or the equipment, just prior to their first major appearance.  (Sounds like The Commitments, doesn't it?).  One other contemporary band that might become known beyond Belize is the Ibo Lights, from nearby Punta Gorda (known as PG) .  Residents in Placencia also fondly remember a band called the Ugly Ducklings, who they claimed were some older fishermen from Placencia who sang country-western tunes.

Listening to Belizean radio was an experience as well.  Though Mr Peters has nothing good to say about them, Radio One, the government run radio station plays just about anything, except Mr Peters of course.  Besides some locally produced music, you could hear Kriss Kross's Warm It Up over and over, along with lots of rap, reggae and soca.  African reggae star Alpha Blondie got plenty of air play.  Country music is surprisingly popular and gets much attention as does both white and black gospel.  Lydia Villanueva, who rented us part of her house in Placencia, told us that her favourite artist is Jim Reeves, including both his gospel and country tunes.  Sure enough you can sometimes even hear Jim Reeves on Belize Radio One.

So Belize is no longer the end of the road.  You might be surprised to know that you can even drive there from the US or Canada.  Just drive to Texas, drive through all of Mexico, take a right turn when you reach the Caribbean, head south, and there you are.  Take plenty of spare tyres, a good radio and don't forget to say hello to Mr Wilfrid Peters and his Boom and Chime Band in Belize City.