Stop Press!  I've just received documentary evidence (in the form of tickets) that prove that I've been a year out of sync in this account since I wrote it. So not possible to blame it on senility!

It all began back in 1977 (not 1976).  The Old Swan Band had been in existence for about a year or so, had met Flowers and Frolics at Sidmouth Festival, and had become aware of other bands and individuals around the country who shared their enthusiasm for traditional English dance music.  Rod and Danny Stradling decided to invite them, and anyone else who would be interested, to a weekend of sessions, dances, talks and chatter - so that they could all get to know each other and pass on their favourite tunes.

Aided by other OSB members, Rod and Danny organised a weekend centred on the Town Hall in their home town of Cricklade, Wilts, and spilling out into most of the seven pubs. 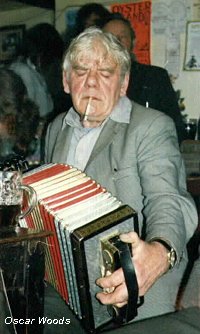 Despite (maybe even because of) their inexperience in such organisational tasks, everyone attending did their best to be helpful, the townspeople were most accommodating - and the weekend was a resounding success.

By the Saturday night there were calls for a second event the following year - which were eventually acceded to with some misgivings, since it was felt that, as the first one had been so good, the follow-up would be sure to be a disaster.  In the event, it was possibly even better - at least better organised!

The inevitable requests that the Weekend should become an annual event produced an unexpected response.  The Stradlings proposed that, should there be further Weekends, they ought not to be at Cricklade, nor organised by them.  Their reasoning was that they would inevitably follow much the same policy every year, making the events predictable and boring, and that it was unfair on people wishing to attend from far-afield, who would always have to travel long distances.  They suggested that the Weekend should move to a different location, and be organised by a different group of people, every year.

So it was that the Weekends from 1979 moved around the country - to Suffolk (twice), Sheffield, Broseley, Derbyshire (twice), Gloucestershire, London, etc.  Some memorable times were had, and some wonderful music played.

Eventually, though, things began to run out of steam.  Looking back, it's difficult to find the precise reasons: the dwindling pool of remaining traditional musicians and singers; depression following Thatcher's re-election; the sheer hard work of organising the events; poor attendance at the 1985 Weekend ...  Whatever the reason was, the 1986 event never did get off the ground, and all concerned thought that the movement had run it's course - regretted, but fondly remembered.

In 1995, the Old Swan Band were somewhat startled to realise that they were about to celebrate twenty years together, and it was felt that some sort of big party was in order.  Then someone noticed that the twentieth anniversary of the band's formation would necessarily coincide with the ninteenth anniversary of the first English Country Music Weekend, and it was decided to merge the two events.

The celebration was held in June at Postlip Hall, Gloucestershire - and everyone turned up!  Almost every conversation overheard that weekend seemed to include the words "God!  I haven't seen you for ten (fifteen/twenty) years ... do you remember when ... ".  The Saturday night dance was played by the Swan Band - starting with the original line-up (bar one) and changing through the evening to reflect the changes in the band over the years, finishing up with the current line-up, and everyone joining in for a grand finalé.  Members past and present played together again (for the first time in a couple of decades, in some cases), and all enjoyed themselves hugely.

There was no thought of re-starting the ECMW series afresh at that point, and nothing might have happened had it not been for an unfortunate circumstance.  Mel Dean, one-time OSB member, died late in 1995, and comparatively few of his friends in music were able to get to the funeral.  It was decided to hold a commemorative dance in Haughley, Suffolk, in the summer of '96.  This gradually turned into a weekend, as more and more friends said they would be coming - and the upshot was that people started saying "Well, we've all come together two summers in a row; it looks like the ECMW is back on the road again."  And so it was.

The 1997 Weekend was held at Postlip (as had the 1982 event and the 20th celebrations), and the plan was that it would alternate between there and Haughley.  But John and Katie Howson eventually decided that they were too busy with other work to take on the whole of the organisation, and John Shorter (at Postlip) was willing to carry on there.  So a small committee was set up (Shorter, Howson, Stradling and Burgess) to co-ordinate the organisation and the ECMW returned to Postlip - hoping for much better weather - in 1998.

And the weather, the food and the organisation was much better and everyone had a great time.  The original rationale for the event moving to different locations was still sound, so it was suggested that Ripponden would be the venue for 1999.  Unfortunately, circumstances conspired against the local organisers - and once again John Shorter was willing - so we remained at Postlip for a further year.  Johnny Adams hosted the excellent 2000 event in Todmorden, and 2001 saw us returning to Suffolk for the third time - in this case, to the Museum of East Anglian Life in Stowmarket - under Katie Howson's supevision.  It proved to be a first class venue and another wonderful event.

2002 saw the ECMW move to the West Country for the first time, to the Devon village of Chagford, where good weather, good pubs and the delightful Dartmoor concert on the Saturday combined to make another memorable event.  In 2003 we returned to the Sheffield area for the second time; Mark Davies hosted the event at the highest house in South Yorkshire, with astonishing views, fine pubs, fine weather and an absolutely superb Sunday afternoon concertina concert.

2004 and '05 were back in Postlip again, and 2006 saw our second venture into Shropshire (the third ECMW was in Broseley) - which seemed to be the hotbed of activity in musical terms at the time ... or so they kept telling us.

And they must have told us true, because 2006 in Bishop's Castle was utterly memorable - despite organiser Dave Hunt's unfortunate absence.  So much so, in fact, that everyone was very happy to have the experience again - and give Dave the chance to actually enjoy it - so the ECMW returned to Bishop's Castle again in 2007.

Most readers interested in the ECMWs will be aware of the more recent events, so I will simply list them without comments;

Past experience has shown that organising ECMWs twice in the same venue produces the best results, so we hope that 2018 will return to Abbots Bromley.  But we're still keen to keep the weekend moving about the country so, if you're interested in playing host in future years, please have a chat about it with one of the current year's committee.