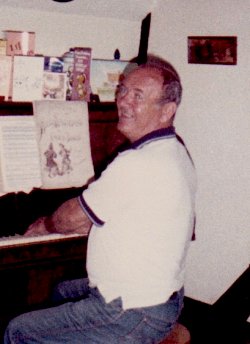 A native of Felling on Tyne, of Donegal stock, he was a fine singer of comic and classic Irish songs, with a number of lesser known Geordie songs - he claimed to have introduced Sally Gee to the folk clubs, and he was probably right.  His strong Geordie accent disappeared when he sang from his varied Irish repertoire, and his sense of humour was earthy and infectious.  A trademark song was Sean McCarthy's hilarious Red haired Mary which struck a particular chord in Scottish circles!

Always active on the Tyneside Irish scene, and a fine Irish dancer, the folk revival saw him help organise the Royal Turf club in Felling, part of the hugely successful 1960s circuit of clubs alongside the Newcastle Bridge, Marsden Inn and the legendary Elliots club at Birtley, where he became a regular in later years.

When the Turf closed, as well as regular informal sessions at his beloved Columba Social Club, his songs were often heard in front of the Marsden Rattlers band of South Shields, and his dance-calling skills were well employed by that band.  He also played piano and occasional fiddle with the band and his piano can be heard on the 1970s BBC LP Songs of Northumbria.  He also became part of the legendary Boldon Banjo Band in the 70s, and thoroughly enjoyed the regular music nights in the Boldon Lad in the Durham colliery village of that name - not all 'folk' music maybe, but part of a great tradition where The Sheikh of Araby met Cushie Butterfield.  He had become a regular visitor to the thriving music scene in Fife and the east of Scotland, and the few accolades at the end of this will attest to how well he was regarded in that area.

A fireman by trade, he retired on health grounds in 1980 and he missed the party, preferring a less formal celebratory 'knees up' with music and old friends in The Malvern pub in Dover.  Friendships took him to Iive in West Cork in the '90s, where his fine singing and nimble Irish dancing has been much appreciated at his local Vincent Coughlan's pub in Ballydehob, although the locals never really cracked the accent!  I often overheard local people there saying he had songs from his Donegal family that had never been heard in Ireland.

He kept up the links with North East England, and Birtley in particular, and as a winter refuge from the rain of his adopted West Cork he spent long spells in Southern Spain.  I and my wife Francie once came across him purely by accident in Fuengirola, holding forth with the locals telling them of the benefits of Newcastle Brown Ale and sausage sandwiches.

Alex was a singer of high quality, and a couple of his other 'specials' were The Brown and the Yellow Ale and The Gateshead Lass.  An attempt was made about 20 years ago to record his distinctive repertoire, but sadly a temporary throat problem intervened, and the project was shelved, a great loss to the traditional archive.

He'll be sadly missed by folk in various parts of these islands, and although I haven't seen him for many years, I'll certainly treasure his jokes, songs and general 'crack' of earlier years - here's to you Mr McKie, you were a true original.