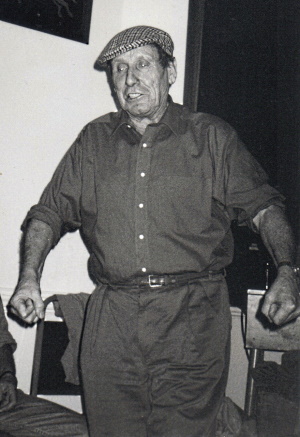 Also: to read a splendid piece on the 'other side' of this extraordinary man, described as 'national treasure twice over' in the Aberdeen Press and Journal, click here

Jock Duncan is a national treasure twice over.  As a singer of the muckle sangs and bothy ballads of his native Aberdeenshire, Jock is a tradition bearer of great authority.  Moreover, he is the patriarch of a family that has made an immense contribution to the Scottish musical tradition.

Born on the farm of Gelliebrae, by New Deer in 1925, Jock grew up in the farming life at a time when horses were still in daily service.  By the age of ten he could drive a horse and plough expertly, an experience that he would later put to wonderful use in performing his famed Tradesmen's Plooing Match song, complete with imaginary livestock.

Music and song were an everyday part of the Duncan household.  Jock's mother was a fine pianist who organised musical sessions in the front room and accompanied the fiddlers she invited.  His older sister Marion sang and brother Jimmy played the fiddle.

A regular visitor to these sessions was the celebrated John Strachan, a local gentleman farmer who went on to sing on BBC broadcasts and appeared on the 1951 People's Ceilidh, a milestone event in the Scottish folksong revival.

Jock remembers, as a youngster in the 1930s, singing along with Strachan and learning Bonnie Udny and Rhynie from him.  He also learned songs from George Kidd, the grieve at the neighbouring farm, and his schoolteacher at Fyvie.  The background information these singers passed on, as much as the songs, added to the richness of Jock's recitations.

Added to these, the cornkister ballads of George Morris and Willie Kemp - Jock's pop idols - learned from their Beltona 78s gave Jock a growing repertoire.

After World War ll service with the RAF, Jock returned to farming briefly and formed The Fyvie Loons and Quines bothy ballad concert party before a new job with the Hydro Board took him first to Caithness and then to Pitlochry.

He never lost his Doric speech or his love of ballads, though, and in 1975 he entered and won the bothy ballad competition at Kinross Festival, beginning a long run of similar successes at folk festivals where his enthusiastic and entertaining renditions became a familiar presence.

In 1996, at the age of seventy-one, Jock recorded his first album, Ye Shine Whar Ye Stan!, followed five years later by Tae the Green Woods Gaen.  A singer who can both captivate a small fireside gathering and mesmerise a concert hall audience, Jock was awarded a 'Herald Angel' for services to ballad singing at the Edinburgh International Festival in 2000.  This formed part of a unique family hat-trick which saw sons Ian and Gordon receive the same award, Ian for his work with the Vale of Atholl Pipe Band and Gordon for his solo piping and composing genius.

With his marvellously rustic delivery and passion for continuing the song tradition, Jock Duncan deserves to be celebrated as long as the sun sets on his beloved Perthshire hills