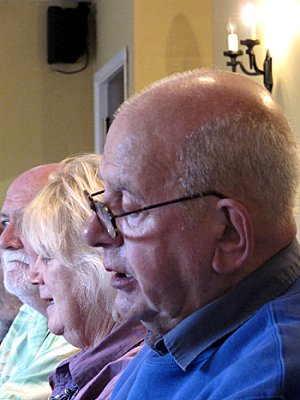 I was greatly saddened to hear of Paul Carter's death.  Sixty-odd years ago he and I were engaged in some joint enterprises, and, although I have a few sharp anecdotal memories, I'm sorry to say a lot of detail has disappeared.  I remember him as being intelligent and witty and enthusiastic about the music, and extremely easy to get along with.  We were both interested in jazz, but we didn't always see eye-to-eye, particularly about Miles Davis, who he was raving about at the time.  He and Angela came over to my place when she was a junior reporter on the Croydon Advertiser, and I saw her at various places including Bampton and Padstow.

I suspect it was Paul who approached Colin Pomroy, the owner of Jazz Collector records, to start another label simply called Collector for the potentially minute 'folk music' market in 1959.  I know he was directly responsible for the Seamus Ennis and Joe Heaney EPs, and I can only guess he was behind the Dominic Behan and Jeanie Robertson issues.  It was Paul's idea to put Bob Davenport and The Rakes together on a record.  Bob and the band knew each other and had performed at the same events, but it never occurred to us to actually play together.  Just to illustrate how things were done on a shoe-string in those days, Paul had the offer from the Magnagraph Studio, off Oxford Street, to have a couple of hours at the studio at a reduced rate because of a cancelled booking.  We went ahead with the recording at short notice in spite of the fact that one of the trio was away on holiday in Jersey.  The fee cash-in-hand was five quid – two to Bob because he sang a song unaccompanied, a pound each to Michael and me, and a pound for the beer in the studio.  A few months later Mervyn Plunkett and I went to the same studio with Paul and edited Four Sussex Singers (Pop Maynard, George Spicer, Jim Wilson and Jean Hopkins), and we later edited a companion EP, including Bertie Clark, Walter Bulwer and possibly Scan Tester, which was accepted for issue but didn't get that far.

Paul heard some of our brief recordings of the band with Walter and Daisy and Billy Cooper and he was keen to record them for Collector.  In 1960, we went up together to Walter and Daisy's place in Norfolk and recorded enough material for two EPs, which were duly edited and delivered to the studio.  However, bailiffs with estreat warrants subsequently called at the studio, and the master tapes, including that of the Bertie Clark/Bulwer/Tester EP were hastily smuggled across to the pub opposite for safety – and were never seen again!

A side issue that reflects more on the state of the record industry than on Paul was, that having heard about the Ennis and Heaney EPs, Dublin Records in New York sent Paul copies of (their now-seminal) LPs of the Clare fiddle player Paddy Canny and the Tulla Ceili Band in the hope that Collector would issue them in Britain; similarly, Harry Oster sent Folksongs of the Louisiana Acadians.  Paul asked my opinion on the music, which wasn't his specialist interest at the time.  Collector hadn't the resources to issue LPs, and Paul fairly casually said, "You can have them" (and I've still got them.)

Paul approached Peter Kennedy about an LP of Bob Roberts, but the proposed fee was too much, and, as I seem to recall, even the subsequent EP stretched Collector's budget.  Paul and I lost contact soon after that; I've got a feeling he must have moved out of London.  He later did some work for Topic Records, and was partly responsible for their Willet Family, Sarah Makem and Phoebe Smith LPs and some of the material on Boscastle Breakdown.  I made contact with him on the telephone in the late 1990s, when I was working on The Voice of the People, and, although he was very friendly in his attitude to me, he was reluctant to talk about Sarah Makem and Phoebe Smith.  Clearly, his attitude had changed when he later offered his unissued Sarah Makem tracks to Musical Traditions.

I was one of the lucky kids who soaked up the beautiful voices on spare pressings that he passed to us between 1962 and 1966 - Anne Briggs was another.  But Paul certainly did more than just 'press switches' as he says in his brief 2012 jottings

There is a difficulty - it's the long gap after he left Topic and then cleared most of everything he had in the world after Angela's devastating departure around 1967.

After the 40-odd year gap, sharing songs among small groups of singers in Bristol and Stroud was a revelation ("I'm a reformed character!").  He was amazed that people were singing the songs as 'straight' as he knew them.  He loved the Stroud events, the invited guests with their songs, and he was so especially pleased to be in contact with Rod about the Sarah Makem CDs.  And he was learning songs all the time.

The first thing that I did for Topic followed from when Gerry Sharp asked me to look/listen through piles of tapes to see if there was anything that could be issued.  I carted them back to Bristol.  Two Eps, released c.1963, were the result - Irish Pipe and Fiddle Tunes by Willie Clancy and Michael Gorman (TOP89), and Troubled Love by Peggy Seeger (TOP72) ... Angela wrote the notes for that.

I think you overestimate the importance of my recording these various singers.  None of them were my 'discoveries' if you like.  Because I had been on the London scene for a few years, and knew some people who were active in the field, like Ken Stubbs, I was just following up their finds.  It wasn't thought possible in those days to put out an album (LP) devoted to 'field' singers unless one could find something else to hang it on, else there would be little chance of it selling and hence recouping costs.  So whether it was Ken or myself had the idea of the Willett family I don't remember, but that seemed a workable idea.  Ken Stubbs had recorded the Willetts (and Pop Maynad, George Townsend, Louie Saunders, etc) on a 4 track domestic machine, so I knew the singers' work even if his recordings weren't thought to be of a suitable standard.

The Willetts lived in caravans but Ken knew how to find them, so I went with him, with a battery machine, either a Uher or an EMI portable.  Bill Leader went out another time to get the other son, Ben, who it was thought only had the one song.

I must have been out with Ken a few times to get pieces from other singers.  I remember being very impressed by George Townsend's Pleasant and Delightful - rather less by his hunting songs.  I did have some pieces from George Townsend, etc, and assembled a proposed album with stuff I had and stuff from Bill Leader's Sussex adventures (which included music - I was keen on a hammer dulcimer player whose name has totally gone) but nothing happened with this material.  I suspect it's all been recorded again anyway.  There's one piece on the Topic Pop Maynard LP which I recorded, it says, but I don't recall the occasion.  We need to bear in mind that I had a stroke back in 2002 and there are some total blanks in my memory, possibly associated with that.

The notion of the 'family' as making LPs of singers more palatable must have persisted because after we had all marvelled at Paddy Tunney's stuff on a Folk Legacy LP and Bill Leader had gone to Donegal to record him, the idea of an LP of him with the other musical members of the family was mooted.  Dunno by whom; Paddy must have spoken to us, Bill or somebody about their talents.  Paddy's mother was a great singer and isn't there some of her stuff on the Topic/Caedmon LPs?  So we went to Northern Ireland to go round the family with Paddy.  His mother, Brigid, could no longer sing, but we called on her.  There was a sister, Annie, who sang, and a brother, Joe, who played button accordeon, etc.  Nothing came of this though, I expect the tapes are in Topic's basement.

Topic was in contact wth Sean O'Boyle because it was he who wrote notes for the Tunney albums.  We would have heard Sarah Makem on the Caedmon set - recordings credited to P Kennedy and Sean O'Boyle.  Derry Gaol was outstanding and would have sent anybody looking for more.  So again I don't know whose idea it was to do a Sarah LP; it might well have been ours.  Anyway, Sean lived in Armagh and Sarah was just to the south of there.  Sean acted as a go-between and appointments were made.  I suspected that Sean had discussed with Sarah what she would sing for us, as she had it all worked out.  Anyway, Sean wouldn't come with us to record Sarah, even though we called for him.  I don't know how Rod got the notion that Sean and myself did those recordings (because that's what the credits on the Topic LP notes say), but I don't mind, Sean deserves the credit, and all I did (as always) was to press switches.