Tradizioni in Val Caffaro - no ISBN

This book and CD really should be reviewed by someone who knows and loves Italian singing, who can read Italian, and who can read music.  In these regards I am only slightly qualified. 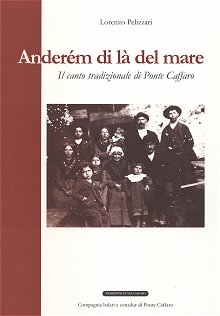 However, since I bought it myself and have no intention of parting with it ... I fear you'll have to put up with my review!

Regular MT readers will already know of my enthusiasm for the ritual dance tradition which takes place in the little Brescian town of Ponte Caffaro at carnevale time - what the rest of the world knows as Mardi Gras and what we English barely remember as Pancake Day or Shrove Tuesday.  What they will not know about (what none of we few regular English visitors to the town were really aware of) is that the valley is also the home of a number of traditional singers, quite a few of whom still sing in public.

First, a little background.  When we all arrive on the Saturday, have unpacked and done some shopping for essentials, the first social event is usually an evening meal in the hotel where the majority of us are staying before heading off to the sports centre outside town where the main pre-carnevale gathering takes place.  This year, we heard rumours that 'Lorenzo's book launch' was taking place just across the street.  Lorenzo is one of the fiddlers in the band which accompanies the dancers on Monday and Tuesday; he plays the low 'third voice' part.  This we already knew ... but exactly what Lorenzo's book was about was slightly less clear.  After the meal I had to return to our flat and it was somewhat later that my wife and I started walking up and down the street looking for the event - without success.  We were just about to leave when we heard faint singing emanating from the local bank building.  It turned out that the upstairs room had been the venue for the book launch, that this was now over and the audience had left, and that several of the local singers and quite a number of the band musicians were having a bit of a song.

It was all as wonderful as it was unexpected.  Perhaps twenty people in all sang during the hour or so that we were there, and seldom more than five or six at a time, but there was no solo singing - 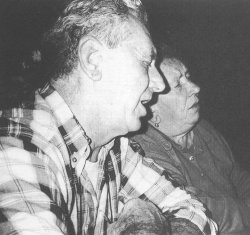 since everyone seems to know most of the songs and would join in for a verse or two intermittently before breaking off to engage in conversation with someone.  The youngest singer was one of the musicians - still in his teens, I would guess.  The oldest, Maria Lombardi (photo,left), is 77 and sang all of every song ... in harmony!  About one third of the singers were women.

At first, we were tempted to imagine that this was just a special, if impromptu, event occasioned by the book launch but, upon reading the book it becomes clear that about two thirds of the CD's 16 tracks were recorded at six separate informal get-togethers in Bar 'Bivio' in the main street where much of the after-hours conviviality surrounding the carnevale takes place.  With hindsight, it's obvious that this was the 'real thing' - the sort of social music-making which traditional communities participate in as a perfectly normal (if, these days, less frequent) part of their lives.  There was not a hint of 'performance' in the entire proceedings - they were singing for themselves and each other.  It was just lovely.

The book is lovely too.  A4 sized, 155 pages, with semi-stiff covers.  It has a four-page introduction by Lorenzo, bibliography, discography, and CD track listing.  It contains transcriptions of the tune and text of 64 songs arranged in alphabetical order.  All the songs, as far as I can see, are in dialect and all of them - like the carnevale music - are local to the town or the valley.  The text transcriptions are by Lorenzo Pelizzari and the musical transcriptions are almost all by Marco Buccio (another of the band's fiddlers), with a few by Gigi Bonomelli (the Capo of the musicians).  The notation is very clearly presented and there are a number of lovely old and modern photos (as below) to enhance a beautifully printed and well designed book.

So it is with considerable regret that I have to point out that the book tells me nothing about the singers but their names and date/place of birth.  The title Anderém di lŕ del mare means 'we will go across the sea' and it's the name of the second song in the book. 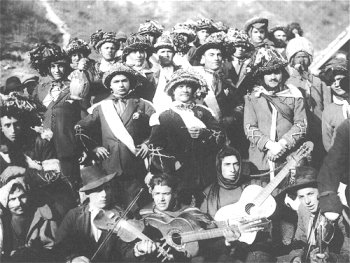 The subtitle means 'The Traditional song of Ponte Caffaro' - so maybe it's reasonable to focus on that rather than the singers on the CD - but there is nothing but the briefest of notes about a handful of the songs, either.  Maybe, in a society like this, it's not necessary to say anything about the singers who are familiar neighbours, or the songs which most people already know; leaving the book as just a nicely produced object celebrating and reinforcing the community and its culture?  Which, of course, is exactly what the songs, music and dance are too!

I can only say that I would have liked to know a lot more - something along the lines of the booklet to the carnevale CD Pas en amůr (available from MT) would have been very welcome ... but as this was produced by a Milanese folk band, for a wider audience, perhaps this approach would not have been appropriate in the present circumstances.

The CD is also very much a product for local consumption since, if you want to really hear the singers, you only have to pop down to Bar Bivio to do so.  Having been present at that singing session above the bank, we can enjoy it as a reminder of what we heard there.  I'm less sure how an uninitiated listener might react - although, in fairness, this can easily be said of a lot of the Alan Lomax Italian Treasury tracks as well.  Typically, a track will start with some chatter among the singers and listeners in the bar, and the song begins about 10 seconds in.  Few are solo items - and many tracks are credited only as 'mixed voices'.  Despite the fact that all were recorded in 1998-2000, the quality of recording is adequate, but no better than that.  Whoever actually produced the CD seems to have made little attempt to even out the volume levels of the tracks, and the whole thing has been processed at an exceptionally low level - my stereo has to be run at full volume to be able to hear most tracks ... and then turned half-way down for the few loud ones!

However, at just L.30,000 or Ł10.00 for the whole package, one can't complain too much.  It will do the job it's intended to, and the songs - all 64 of them - are there for anyone to read, listen to and sing for themselves.  This is a product of the community, by the community, for the community.  How many other traditional song and music cultures have done as much, I wonder?

The book + CD can be obtained from the Compagnia balarě e sonadur di Ponte Caffaro, c/o Gigi Bonomelli, Via Quadri 1, 25070 Ponte Caffaro (BS), Italia.  Details can be found on their website at: www.pontecaffaro.it or e-mail Gigi at: bonomelli@bagolino.org