And then it Happened!
Ken Langsbury's Stories 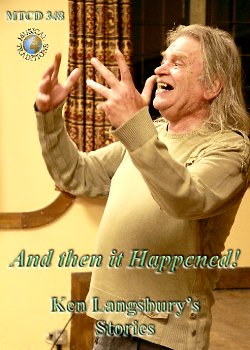 One often wonders if a two-dimensional CD can ever really do justice to the multi-dimensional characters that our country's tradition bearers are recognised as - and the answer is of course sadly not.  Technology will never replace only suggest at.  However in the cases of previous Musical Traditions successes such as the Brazil family Down By the Old Riverside, Wiggy Smith's album and Keith Summer's collections, these recordings nonetheless allow a rare and valuable insight into these often marginalised and very un-public people offering the uniqueness in their music, language, voices and interpretations of our country's ways.

With this in mind, how does one assess And then it Happened! when, thankfully in Ken Langburys case, it still is … happening?  Ken is far from a memory, but as full of vitality as he ever has been (though I don't reckon his Morris leaps reach the same heights the biographical notes claim he once could).  And not to suggest that MT records should (or does) promote only the deceased!  In fact, I look at this release as a success for both Ken and MT in the recognising of a treasure on their own doorstep.  This is hinted at in the booklet but an important point, my first reaction of hearing about this CD's pressing was “About bloody time!”

When one 'dissects' traditional singers into why and what makes them so 'source-y' there is no definition that Ken does not satisfy.  The only difference I can find is that, unlike some of the less accessible voices of some of the lesser-know but halloed singers, Ken is a born entertainer and his stories and songs are as enthralling as one could ever have heard in the last 30 years at least.  So why so long?  Ever since I first met Ken I have hoped to have him heard beyond his immediate and loyal circle.  Here is a man who carries the passion, the pathos, the pleasure and the cheek every performer should strive for.

His repertoire is as wide ranging as any healthy non-purists (and thus true traditional singers), distinctly making anything that he chooses to learn his own.  Even his late night calling card song I'm Going to Dixie receives an almost 'wild west-country' treatment and becomes as traditional as any local ditty or tale.  But that song doesn't feature in this collection and nor do many of the magnificent Gypsy ballads Ken sings with that 'wimmering and wommering' voice of his - a voice that defies tone or rhythm.  Nope, this is mainly a collection of stories, with smatterings of song, that Ken has gleaned from local figures and sources among his fellow Gloucestershire countrymen and beyond, and captures just some of his many voices.

I think this is demonstrated best by Ken's own composition How Do You Spell Yokel?  This short yarn suggests so succinctly the complexity of characters that Ken has learned from, studied, absorbed and picked out for this collection.  Surely to spell a person, there must be a definitive language to frame them by, whereas the land we are brought into is one that is ruled by creativity of interpretation.  Each vignetted dilemma is fair challenge to us listeners as to the multitude of ways we misconstrue, or are simply unaware of, potential possibilities within in our modern correspondences.  There is no 'yoke' in any of these yokels' ways of seeing; each person is untethered and free in thought and highly original - not a pastiche or stereotype in sight.  This is a rich tapestry of voices where the only characters who lack any dimensionality are the outsiders, be they the man from the BBC, or 'The Motor Man'.

What also shines in this recording is the skill of Ken's vocal expressions, how he howls like a wolf one minute or whimpers like a bruised child the next.  It may be sad that some of his bigger songs are not to be found in this album (no doubt being saved for the next recording) but in his telling, Ken sings his words with a musicality that is so rejoicing and melodic.  My only concern with the production is the amount of applause that on perhaps too many occasions sorely reminds the listener, while on this journey through 'Ken Land', that this is a staged performance.  Other than that Hooray! finally 'King Ken' has an album, and hopefully he will now be in demand to share his trove beyond his usual stomping ground and gain the recognition as the cultural treasure that he is.