Try this for an unusual, possibly unique, scenario: a working-class family band (three brothers - the lead singer is a shepherd); average age 39, yet all are traditional singers in the true sense; a CD made in 2000; music in which there's not a hint of any 'modern' outside influences - yet which is so popular that it appears at Womad; and is so accessible that no-one I've ever played it to has been less than enthusiastic at the first hearing.  You don't get too many of these to the pound!

This is the second full-length CD by the cantu á tenores group from Oniferi to be (I would imagine) widely available outside Sardinia. 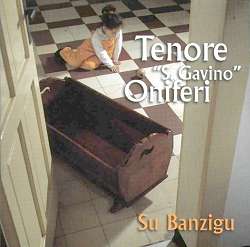 I first heard them on the small Italian Taranta label (see our Ballos Sardos Vol.1 review), and then on the Music of the World CD Polyphonic Singing from Sardinia (MOW 152 - see review).  In both cases my reviews were extremely enthusiastic.

Tenore 'San Gavino' de Oniferi - who have now added the patron Saint of their village to their name - certainly deserve a widely distributed and top quality record to show the world their greatness.  And truly great they are ... and it's good that the general record buying public has the chance to hear something other than their opposition from Bitti.  Because what you get here is quite different - the Oniferi singers are younger, faster and harder ... both more suited to a younger audience and closer to (my experience of) the tradition.  It's a good trick if you can do it.

Oniferi is a town in the central Barbagia region of the Island, and right in the middle of the area where the cantu á tenores is still performed.  The boche (lead voice) is Francesco Pirisi, who is 42 and his twin brother Giovanni sings contra.  They were born in the neighbouring city of Nuoro but had moved to Oniferi by the time younger brother Carmelo (mesu boche) was born in 1962 - you can't beat a family band!

The bassu is Raimondo Pidia, born in 1961 - so this is a pretty young group ... and they sound like it (sound clip - Sa leppa pattadina).  Don't think that this means they are a sort of Sardinian Young Tradition, merely that they have none of the pitch inaccuracies or loss of tone we English may have come to associate with traditional singers.

The slim 18 page booklet gives a brief account of the group and its members and a rather fuller one of the cantu á tenores tradition, in both Italian and English.  The full words of all the songs are given in Sard, with a resumé of the song's content in English.  In other words, it's adequate - but only just.  From a proper Sardinian production like this I would have hoped to have found out more than I already knew, rather than less.

The songs are all pretty standard cantu á tenores fare, but sung with great style and that essential ingredient - passion.  The harmonies are wonderfully tight and the elusive fifth harmonic voice, the 'quintina', is frequently heard.

Francesco Pirisi, whose boche part would normally be just a short verse, or even a phrase, between the polyphonic refrains or choruses, is a joy to listen to in itself (sound clip - A s'Andira).  Indeed, if it were possible to hear what he sings in isolation from the chorus I can imagine that it would be as enjoyable as if he were a solo singer.  But that's not what the cantu á tenores genre is about - it's sung dance-music - and that's what you get here.  I first encountered it on that essential CD of Sardinian singing, Polyphonies de Sardaigne (Chant du Monde LDX 274760), recorded by Bernard Lortat-Jacob in the late '70s and early '80s and I really do feel that this 'San Gavino' group is the first I've heard to equal those benchmark performances.

I urgently recommend this record to anyone with an interest in Sardinian music - and to anyone else with a fascination for the wonderful things that four human voices can do together.  But, since Felmay's UK distributors, Discovery, don't deal with any of their distributed labels (like Kunzertu), Musical Traditions Records has stepped into the breach and included this CD (only Ł12 inc p&p) along with its own and Topic traditional records, all of which are now available from our Records page.