These three CDs are likely to be the last North American Traditions Series releases on Rounder.  Even before the company was sold to a bigger firm, the financial woes of the music industry had created a situation where, despite the best efforts of Bill Nowlin, little interest remained in the company for records of this sort, and our three CDs barely squeaked out the door.  At present these projects are available only from Amazon.com on a 'print upon demand' basis with booklets that are reduced in length from the original notes as printed here.  Interested parties should obtain these CDs now, for their projected longevity is very uncertain.

Many of our earlier NAT projects can now only be purchased (if at all) as MP3s without notes or documentation.  Rod Stradling and I plan to reissue some of these CDs on the Musical Traditions Records label in their original formats, along with several unissued projects, as soon as I find time to collect the original materials together.  But it will probably not be possible to reissue the Cape Breton sets in that mode. 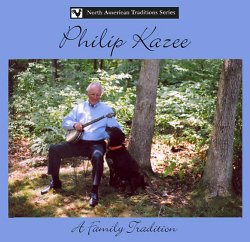 Philip Kazee is the son of Rev Buell Kazee, whose early recordings made such an impression.   In 1927, he had received an inquiry from Brunswick Records, asking if he would consider recording in their studio in New York City.   Kazee traveled to New York, and eventually signed with the label.   His first record was Roll On John / John Hardy.   Over the next two years, backed by an assortment of New York musicians, he recorded a further 56 songs, including such hits as The Lady Gay, The Sporting Bachelors and The Little Orphan Child.

Buell grew up on Burton Fork, an isolated hollow in rural Magoffin County, Kentucky, at a time when the performance of ballads and songs as well as fiddle and banjo music was common among many of his neighbours and was entertainment for the rest.   Philip was born February 23, 1933 in Morehead, Kentucky, in the parsonage of the First Baptist Church, his father having become the pastor there, beginning in 1929.   Philip also became a full-time Baptist minister, but he learned to play the banjo in the style and numerous tunings of his father, and he also learned his extensive repertory of ballad and songs.

Philip Kazee was recorded by Mark Wilson in 2007, when he was aged 74, so you shouldn't expect to hear performances like those of his 27 year old father, but they do compare very favourably with those Buell made (also with Mark Wilson) in 1972, when aged 72, released on June Appal JA0009, reissued on CD in 2007.   Although his voice is lower than his father's tenor, he has the same extraordinary range and intensity.   His banjo picking and his voice sound remarkably like Buell Kazee.

This is a very interesting CD, and a pleasure to listen to.   The booklet notes (see PDF link above) are extremely extensive, and give an excellent picture of the man, his father, and his 'Family Tradition'. 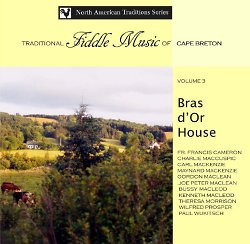 This is the third in a fascinating series of CDs. masterminded by Mark Wilson and Gordon MacQuarrie, featuring the 'Old Style' traditional fiddling of Cape Breton Island. It features 11 fiddlers and several accompanists, with Doug MacPhee featuring on five tracks. None of the musicians are exactly youthful, and several have died since they were recorded, A number of the fiddlers have recorded their own albums, and not all remain resident on Cape Breton. They were mostly recorded between 2000 and 2006, although one (Carl Mackenzie) was recorded in the 1970s.

An interesting aspect of the Cape Breton Scottish fiddling tradition is that it crossed cultural, religious and gender boundaries, and this fact is represented here; one of the stand-out players is Wilfred Prosper, who was a leading member of the indigenous Mi'cmaq people.

The CD illustrates the incredible strength and depth of traditional fiddling on the Island. The performers were chosen as representatives of an older style of playing than the one we are familiar with from the younger players. Although many of the players were probably not playing as well as they had done earlier in their lives, the common characteristic on all the tracks is full-blooded panache with which they play. The slow airs, always a cruel test of technique, are a little hard on the ear in some cases, but the lift and drive in the dance tunes is always present. The other outstanding player on the recording, and perhaps the best known, is Carl MacKenzie. As already mentioned, his track was recorded in 1976. It was chosen as it represented an older style of playing, characteristic of the Washabuck area where he grew up. Since then, his style and approach have evolved away from that, although he remains one of the best Cape Breton fiddlers.

The piano accompanists also represent an older, unobtrusive and more straightforward style of playing than we are now used to. As a bonus, Gordon MacLean, who accompanies on three of the tracks, gets a solo outing not on the piano, but the pipe organ. The sound of a strathspey/reels set on this instrument is unique.

The extensive notes that we have come to expect from Rounder don't come with the CD, but area available on line (see link, above). They contain an excellent introductory essay by Vince MacLean, discussing the fiddling in the Washabuck area in the '40s, '50s and '60s. There are also copious notes on the players and their tunes.

Although it might seem a little specialised and academic at first, this CD is in fact a good listen, and for anybody interested in the Scottish fiddle transition on Cape Breton Island - a must. 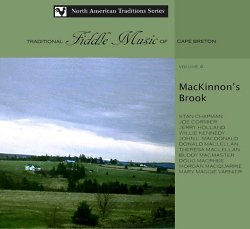 This is the fourth and final volume of this excellent series covering the Old Style of Cape Breton fiddling. It completes the survey of some of the older generation of players, recorded mainly between 2000 and 2006. It features 10 fiddlers and five piano accompanists of whom Gordon MacLean appears most frequently.

There are tracks from a couple of fiddlers well known to us this side of the Atlantic (Buddy MacMaster and Jerry Holland) as well as many other fine players. Outstanding among these is Theresa MacLellan. Her three tracks were recorded in the late 1970s, revealing a very strong and dynamic style. Her brother Donald, another fine player, also appears, illustrating a common feature of Cape Breton music, where whole families would be deeply involved. The 15 tracks cover a lot of music, all played with enormous brio and style, if not always with the same level of control.

The extensive notes. available only on line (see link, above) include an absorbing essay on 'Correctness' in Cape Breton Fiddling' by Kate Dunlay, and an equally absorbing piece by Mark Wilson to conclude this epic quartet of CDs produced by him and Morgan MacQuarrie (who can be heard playing with Willie Kennedy on the final track).

Like many other Rounder projects, this series of CDs forms not only a very valuable resource for researchers and enthusiasts, but gives us access to some fine performances which would otherwise be denied to us, especially on this side of the Atlantic.