I am grateful to Ian Anderson for a good many things - principally friendship and kindness - but a close third must come the fact that he sent me a cassette copy of this record some 15 years ago.  I do know that some readers of these pages greatly disparage fRoots magazine - and include its editor within their disdain ... but I can only say that they probably don't know him as well as I do.  They are probably also unaware that he was the very first of MT's sponsors, and has generously been contributing a free quarter-page advert every month for the last three and a half years!  He has also heard, and appreciated, far more real traditional music than I - or many of my readers - ever have (and usually several years before we ever got to hear it) ... as was the case with Sardinian cantu á tenores. 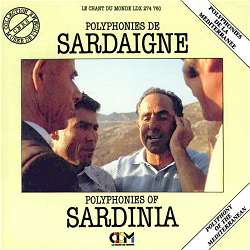 If there were a few more people who purport to be interested in traditional music with even half Ian's energy and enthusiasm, we would be in a far better position than we are at present.

This CD, originally an LP plus six extra tracks, is one third of the fruits of several field trips to Sardinia undertaken by Bernard Lortat-Jacob in the period 1979 to '85.  The other two thirds are the sister-record to this one, Polyphonies de la Semaine Sainte (LDX 274936) and the truly wonderful Sardinian Chronicles - probably the best book about traditional music I'm ever likely to read.

This present CD is not, I should point out, wholly concerned with the cantu á tenores, though this genre does constitute the vast majority of the tracks.  In addition there's a short extract from a gara poetica - a competitive and wholly improvised song by (in this case two) singers who vie with each other in both poetic and melodic invention on a set theme.  This one, on 'Art and Nature', recorded during a festival in Desulo, lasted for an hour and a quarter.  The singers are backed-up by a coro or 'choir', very similar to the tenore one, who sing phrases and choruses between the lines and between each singer's contribution.   (I have seen a video of one involving three singers, with guitar and accordion back-up, recorded only about six years ago, which I was told lasted from 9:30 'til 4:00 a.m.!)

Also to be heard is a 'guitar song', in this case a ballu brincu - literally a 'jumping dance' -

popular all over the island.  Although it's not strictly polyphony, the trunfa (jews harp) part does call to mind elements of the tenore genre (sound clip).  In a way, it's surprising that a track, or at least an extract, from Sardinia's other great polyvocal tradition, the sacred songs of the Coro, is not included here - this record concentrates entirely on the secular sung dance music of the island.  Of course, there is another whole CD of coro singing on Polyphonies de la Semaine Sainte, mentioned above.

Turning to the tenore tracks, we find contributions from groups from Fonni, Nioneli, Orosei, Irgoli, Lodč, Desulo and Orune.  The Orosei singers, recorded during the last trip in 1985, get four tracks while the others only one or two.  There's nothing here which is less than splendid, but inevitably a listener tends to have favourites - and mine are the Guppo tenores from Fonni in the Nuoro province, right in the centre of the island.

For many years I lamented the fact that, as cantu á tenores became popular in the wider 'world music' scene, nothing was being released which was a patch on the 'real thing' - these benchmark recordings from two decades ago.  Certainly, I don't feel that the hugely popular Tenores di Bitti (perfectly good, but only that) get anywhere near these real people from the villages.  I'm pleased to say that the situation is being remedied by recordings from groups of the calibre of those from Oniferi and Oliena, whose singing is now available in the UK from MT at our Records page.

This entire record is absolutely riveting listening - it's one of those which always gets played to visitors to our house on the slightest pretext, usually after several bottles of wine at around one in the morning - and no-one, no matter where in the world they come from, has failed to be utterly impressed by it.