Will There Be Any Travellers in Heaven?

In 2020 Rod Stradling and myself produced a three CD set of British and American recordings under the title 'Wait Till the Clouds Roll By - American Songs in the British Folk Repertoire' (Musical Traditions MTCD518-0).  The British songs comprised field recordings of traditional singers, while the American songs were taken from commercial recordings made in the 1920's and '30's.  In most cases we included comparison recordings of the same songs, sung by both British and American singers.  The basic idea was to show how many American songs had been taken up by British singers.  In many cases we suggested that some of the songs could have been learnt directly, or indirectly, from recordings of American singers which had been reissued in Britain by commercial British Record Companies, such as Regal Zonophone.  In most cases the American and British texts and tunes of the songs were very similar.

A number of the British versions of the songs had been sung by English Gypsies, such as Mary Anne Haynes, Chris Willett, Doris Davies, Eddie Penfold, Caroline Hughes, Bill Elson, Wiggy Smith and Levi & Derby Smith.  These singers also had a number of so-called 'Gypsy' or 'Romany' songs in their repertoires.  But many of these so-called Gypsy songs were written by Gorgios – often as part of a stage production – and these songs paint an unauthentic and rosy picture of Gypsy life.  Take, for instance, E T Paull's The Romany Rye – A Gypsy Intermezzo. 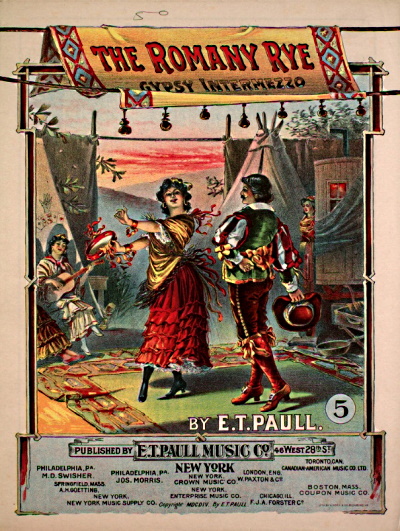 Or what about the song, also title Romany Rye (Roud 4844), which had been written in the late 1880s by C Bellamy and G Weeks.  Interestingly many Gypsies have taken to singing this song, including singers such as Phoebe Smith of Kent and Suffolk.  This is Phoebe's text:

I were borned in an old gypsies wagon.
I were brought from the commons you know.
When the trouble begin in the winter
And that's when we know where to go.

But I am determined to marry the girl that I love
And take a wagon and a tent on my own.
I'm a Romani Rye, a poor didikai,   (rye = gentleman, didikai = half-Gypsy

1
Borned in a tent underneath the blue sky

When we began selecting songs to include on the 3 CD set, Rod and myself found that there were far too many suitable songs available and we had to be selective in our choice.  However, with hindsight, I think that we should have included another song, one which showed how a British singer had adapted an American song for his own usage, changing the story line from that of an American hobo to that of an English Gypsy.  The song was Will There Be Any Travellers in Heaven?, which I had recorded from a Surrey Gypsy, Derby Smith, in the 1970s.  Derby accompanied his singing with his own guitar and the recording was issued on the Topic LP Travellers (Topic 12TS395).  The recording is currently available on a Musical Traditions CD, Here's Luck to a Man (MTCD320).  Derby's text was as follows:

Will There Be Any Travellers in Heaven?

2.  There's a Master up yonder in Heaven,
Got a place that we might call our home.
But will we have to work for a living,
Or shall we continue to roam?

4.  Will the gorgios join with the Travellers?   (gorgio = a non-Gypsy)
Will we always have money to spend?
Will they have some respect for those Gypsies
In a land that lies hidden up there?

5.  Will there be any Travellers in Heaven?
Any pubs where we might get some beer?
Will there be the same old landlords
Who say, "Sorry, no Gypsies served here"?

It was quite apparent that Derby's song, and singing style, was based on that of the American singer Jimmie Rodgers (1897 – 1933), who was also known as 'The Singing Brakeman' and 'the Father of Country Music'.

2  In fact, Derby's song is clearly based on the Rodgers' song 'Hobo's Meditation', which Rodgers recorded in 1932.  The song is attributed to Rogers, but there is evidence to suggest that the song was actually the work of one Floyd D Henderson.

3  Here is the text that Rodgers recorded:

1.  Tonight as I lay on a boxcar
Just waiting for a train to pass by,
What will become of the hobo,
Whenever their time comes to die?

2.  Has the Master up yonder in heaven
Got a place that we might call our home?
Will we have to work for a living,
Or can we continue to roam?

4.  Will the hobo chum with the rich man?
Will he always have money to spare?
Will they have respect for a hobo
In the land that lies hidden up there? 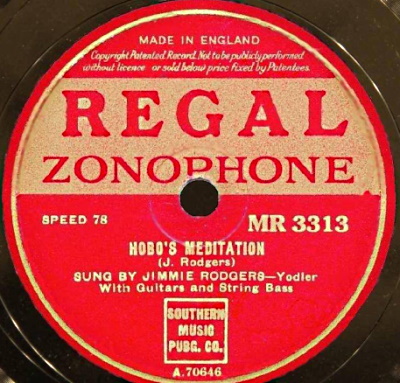 If we examine the two texts it will be seen just how much of 'Will There Be Any Travellers in Heaven?' is based on the Rodgers' song.  Take, for example, the opening two verses.

It will be seen that in both cases the verses are very similar, the only real difference being that Derby uses the words 'roadside' and 'Travellers', rather than Rodgers' 'boxcar', 'hobo' and 'train' in verse 1.

Verse 3 and 4 show slightly more changes, although the verses are still clearly based on the Rodgers' text:

Jimmie Rodgers' Hobo's Meditation only contains four verses.  Derby Smith's two extra verses deal specifically with the Gypsy life, though even here we still find one line which is based on the opening line of Rodgers' verse 3:

Derby Smith's father, the singer Jasper Smith, was very happy to tell me that Will There Be Any Travellers in Heaven? had been composed by his son.  Clearly, though, this is not quite true.  Derby's song is based on the Jimmie Rodgers' song and, apart from seven lines (out of twenty four) is, to all intent and purposes, the Jimmie Rodgers song.

But is that really true?  Is it really the same song?  By removing a very small number of American words – boxcar, hobo, freight train and brakemans – and replacing them with words such as Travellers, gavvers, Council, Gorgios and Gypsies – the author had totally changed the identity of the song.  This is no longer a song about American hobos.  It is a song by, and for, English Gypsies.  It tells of their life and of the everyday struggles that they face.  It tells of the pressures that they live under and it says that, if things do not improve, then many Travellers would 'rather be under the ground'.  It is, if anything, a bleak survey of what it was like to be a Traveller in the 1970's.

One final point.  Sometime, shortly after Will There Be Any Travellers in Heaven? had appeared on the Topic LP, I heard it suggested that the song had not be 'written' by Derby Smith, but rather by one of his cousins, whose name I never discovered.  If this was true, then Derby must have known and must have knowingly falsely claimed that this was 'his' song.  I did query this with Jasper Smith, who remained adamant that Derby had written the song.  Alternately I could suggest that the 'cousin', or whoever it was who had claimed authorship, was making up his story for reasons that I am unable to explain.

I cannot guarantee that Derby Smith wrote this song – although I like to think that he did.  But, whoever wrote the piece does deserve praise for what they produced.  Over the centuries many people have produced songs which tell of their daily struggles.  Here one thinks of Mary Brooksbank's Jute Mill Song (Roud 2585) or, perhaps, the song Poverty, Poverty Knock (Roud 3491), which was possibly written by a Batley weaver called Tom Daniel.  And British and Irish Gypsies and Travellers also have a tradition of writing songs about their own struggles.  Will There Be Any Travellers in Heaven? is one such song, one which 'tells it as it is',

4 and , though written over forty years ago, it is a song that is sadly still relevant today.

1.  The line 'I'm a Romany Rye, a poor didikai' is incorrect in that one cannot be both a Romany and a didikai.  I suspect that Bellamy and Weeks were unaware of this, and probably believed that both words had the same meaning.

2. It was also apparent that Derby Smith liked Jimmie Rodgers songs, because he recorded two other songs from Rodgers' repertoire at the same recording session.  These were 'California Blues' (Roud 1180) and 'In the Jailhouse Now'(Roud 18801).  Both recordings are available on the Musical Traditions CD 'Wait Till the Clouds Roll By' (MTCD518-0).

4. Compare, for example, Derby's penultimate line 'I'm so tired of roaming this country' with this line from the Bellamy and Weeks 'Romany Rye' song - 'Roaming all-round the country that life will just suit me'.