(Lovers of Italian music who read this review when it first appeared in August and subsequently
tried to buy the CD will have been disappointed to find that the task was well nigh impossible.
As ever, MT has sprung to your aid, and it's now available from our records page.)

Regular MT readers will already know of my enthusiasm for the ritual dance tradition which takes place in the small eastern-Lombardian town of Ponte Caffaro at carnevale time - what the rest of the world knows as Mardi Gras and what we English barely remember as Pancake Day or Shrove Tuesday.  What they will not know about (what none of we few regular English visitors to the town were really aware of until a couple of years ago) is that the valley is also the home of a number of traditional singers, quite a few of whom still sing in public.

In March 2001, I reviewed the book and CD Anderém di lŕ del mare - Il canto tradizionale di Ponte Caffaro by Lorenzo Pelizzari.  The former outlined the singing tradition in the valley and gave the music and texts of 64 songs Lorenzo had collected, the latter contained recordings of 16 of these songs by traditional singers, mainly from informal sessions in Bar Bivio in the town's main street.  At this year's carnevale, the singers were much in evidence in the town and at the various social events surrounding the ritual dancers and their musicians.

In late-January I got an e-mail from the capo of the musicians inviting me to a 'folk music convention' in the town, to be held the weekend before carnevale.  Unfortunately, I couldn't stay on for the following week, or afford two trips to Italy, so I had to decline - expecting to see all our friends a week later at carnevale - 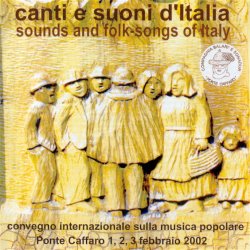 which, sadly, we were unable to attend because my wife was unwell.  Nonetheless, when we met them all again at Sidmouth International Festival last week, we were presented with this CD of some of the performances which occurred at the convention.  Now I wish even more that I'd managed to get there, somehow.

The CD begins with two tracks from the Ponte Caffaro singers, followed by two from a group of singers from Franciacorta and Ponte Zanano.  In truth, one might imagine that all of these four tracks were by the same group since all the singers involved come from roughly the same area, have similar repertoires and singing styles, and both groups have much the same age and gender makeup.  These are some of the people we heard for the first time at the launch of Lorenzo Pelizzari's book in 2001;

this is real traditional singing - impromptu, unrehearsed, sung for enjoyment and esprit de corps with very little of the 'performance' about it.  You may guess that I love it!  (sound clip - Quel capelin di paglia - Ponte Caffaro singers)

Next are two songs from the Bregoli Family - a group of miners from Pezzaze in the High Trompia Valley.  These miners' songs deal with the dangers of the work, the contempt for that danger, and the fatalism with which it's results are viewed, but also with the pride the miners feel for their trade and the economic prosperity (compared to the poor agricultural workers around them) which it brings.  The four (I would guess) singers sing in the high, forced, voices so often heard in other parts of the country, and the songs have a simple and very effective accordion accompaniment.  More good stuff.

Tracks 7 and 8 come as a complete surprise - a small and very competent brass band accompanies a group of singers who have obviously practised their songs ... this is clearly a performance for an audience, and so comes as quite a shock after the preceding six tracks.  The gleeful oom-pah quality of the playing should not really surprise us, since it was not so very long ago that the Caffaro river formed part of the border of the Austro-Hungarian Empire - and today it's still the border with the neighbouring province of Trentino Alto Adige, where this group, Cantiere Destrŕni, come from.  Having been part of a single political and cultural entity for such a long time has meant that the folk music of Trentino is markedly different from that of Lombardia.

An equally abrupt culture-shift comes with tracks 9 and 10 - we move to Liguria, to Genova, and the the trallalero.  La Nuova Mignŕnego come from the Polcervera Valley and sound as if they have about six members - this is quite small for a squadra;

nine is said to be the optimal number.  They also sound as if their falsetto may be a woman - certainly uncommon, but not unknown, particularly these days.  They may not be quite the best modern squadra I've heard, but they are still very, very good. (sound clip - Serenata a Genova)

Tracks 11 and 12 provide the surprise of the whole CD and, apparently, of the convention.  Amerigo Vigliermo was invited as a speaker, but also brought along three friends with whom he sang.  They were absolutely superb, with the high, clear, passionate voice of Norma Betteto Coello being particularly outstanding. (sound clip - Teco vissi)  They come from Piemont, but we're not told where.

Everything we've heard so far has come from the north of Italy - but next are two songs from the Coro su Cuncordu from Cuglieri in Sardinia.

Whilst the Sardinian cantu a tenores genre is becoming quite well known outside the island, few, I think, will have heard much, if any, of the rather similar coro (choir) tradition.  Based on just four voices, this is glorious, slow, sombre singing, in perfect harmony.  The first song is a Stabat Mater and the second is a secular love song, Amurinedda mia (sound clip).  My own knowledge of the genre is somewhat limited, but the Coro su Cuncordu di Cuglieri are quite as good as almost any I've heard.

We move to the south of mainland Italy for the remaining five tracks of the record - three from La Macina (Marchč) and two from Canzoniere Grecanico Salentino (Puglia).  Both are revivalist groups and, whilst extremely good, they don't excite me in the way the other contributors to the CD do.

The whole disc is well recorded, produced and packaged - even to the point of having two booklets, one in Italian and one in English.  It is a considerable technical step forward from the disc which accompanied Anderém di lŕ del mare, yet like it, both the convention and the CD are products of the community.  How many other traditional song and music cultures have done as much, I wonder?

I strongly recommend this CD, which can be obtained from Musical Traditions (see heading note), or by writing to Compagnia balarě e sonadur di Ponte Caffaro, c/o Gigi Bonomelli, Via Quadri 1, 25070 Ponte Caffaro (BS), Italia or by e-mailing Gigi at: bonomelli@bagolino.org